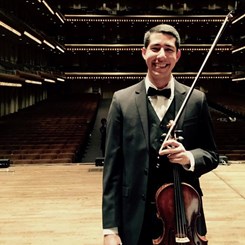 He holds a Master Degree from Mannes College in New York under the tutelage of Daniel Panner, principal violist of the New York City Opera, a Graduate Professional Diploma from the Hartt School of Music in Connecticut with renown soloist – Rita Porfiris, and a Bachelor Degree from the Moores School of Music studying with principal violist of the Houston Symphony - Wayne Brooks.
During his studies, Omeed performed with various professional ensembles in New York, Hartford and Houston. Some ensembles have included Brazos Valley Symphony, Garden State Philharmonic, International Chamber Orchestra of America and Manhattan Symphonie. There he performed at notable venues such as Carnegie Hall, Alice Tully Hall, and Avery Fisher Hall.  He has spent his summers performing at various music festivals throughout the United States, Germany and Italy.
Having received training from some of the most skilled and inspiring teachers in the country, he feels the desire to pass on the best of what he has learned to others. Omeed enjoys working with all ages and has noticed that the process of learning a musical instrument provides a unique opportunity for people to grow not only as musicians, but also as human beings.