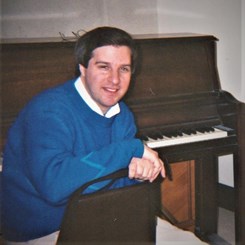 Dr. Brill has composed numerous classical-style compositions including a cappella vocal works, instrumental chamber compositions, symphonic orchestral pieces and compositions for both choir and orchestra. In the fall of 2009, Dr. Brill was commissioned by Jonathan May, director of FAYO, to compose a large-scale orchestral work entitled Grand Overture. In 2010, he was commissioned by the Bach Festival Orchestra and Choir of Winter Park to composed Christmas music for the 2011 season. His composition/arrangement entitled: Veni, Veni, Emmanuel was premiered on December 10, and 11, 2011 as part of the Bach Festival’s A Classic Christmas: Seasonal Music. Some of his original works also appear in performances on Youtube.com.