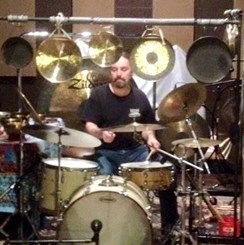 Paul Stranahan has been teaching and playing percussion professionally for over twenty five years. He teaches drum set in all styles, snare drum, mallet instruments (marimba, xylophone, bells, etc.), and how to read music. He stresses the importance  not just of practicing, but how to practice. The latter can also be applied to all aspects of learning.

Paul has been a band leader since 1999, when he decided he wanted to focus on the kind of creative music that is his passion. He has recently released a double CD for the Infinite Number of Sounds label titled, "Gong and Singing Bowl Improvisations." He plays drums, composes, and leads the progressive fusion band PSI-Paul Stranahan's Insomnia, and the modern jazz group the Paul Stranahan Trio. Both bands have two CD releases. He also co-leads with guitarist Tim Mirth in the experimental avant-garde group, Night Terrors which released an all improvised CD. He also performs solo marimba.

Abstract Logix, a progressive instrumental magazine, said of PSI-Paul Stranahan's Insomnia, "As a drummer leading an ensemble with self-penned compositions, Paul is occupying a mantle that few can approach." A career highlight for Paul, was when both his Trio and Red Side Visible (an avant/metal group Paul played and composed for) were two of the four American bands out of hundreds applicants that were selected to perform in Belfort, France at FIMU (Festival International de Musique Universitaire).

For more info see www.paulstranahan.com and