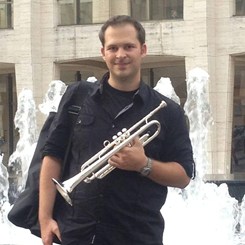 Peter Auricchio is a versatile trumpet player from Stony Brook, New York. Peter plays with a commanding yet refined sound and is comfortable in a variety of musical styles from 16th Century Baroque to 21st Century Commercial. Peter received his Bachelors of Music in Trumpet Performance from the Boston University College of Fine Arts in 2003. While at B.U. Peter studied with Terry Everson, a world renowned recital soloist and freelancer in the Boston area.

In 2002 Peter placed runner-up in the International Trumpet Guild's Moch Orchestra Competition. Upon the completion of his Bachelors Degree, Peter played 2nd trumpet on the 2nd National Tour of Cole Porter’s Kiss Me Kate!. In 2007, Peter received his Masters Degree in Trumpet Performance with a Jazz Emphasis from the Lamont School of Music at The University of Denver. While in Colorado, Peter studied with Alan Hood, know for his distinctive jazz and lead playing and as the definitive authority on the life and career of jazz great, Clifford Brown.

Since the turn of the Millennium, Peter has performed across the United States and Europe at such venues as Carnegie Hall, Boston Symphony Hall, Seiji Ozawa Hall, Alice Tully Hall, The Royal Northern College of Music, Boettcher Hall, St. Bart's Cathedral, The Saratoga Performing Arts Center, Nassau Coliseum and The Beacon Theatre ...to name only a few. Peter has been a member of the International Trumpet Guild since 1997. Currently, Peter is freelancing and teaching on and around Long Island, New York. Peter is on the faculty at Music & Arts in Stony Brook and a standing member of several ensembles, including: The Top Shelf Brass Quintet, The Swingtime Big Band, The South Shore Brass, The Black Tie Affair orchestra, Nitework Band and The New Millennium Jazz Band. For more information on Peter's career and Performance schedule, please see his website at www.TrumpetPete.com