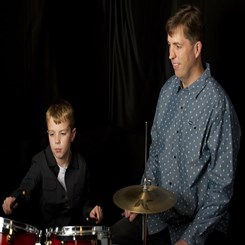 Phil Bowden has Bachelor's Degree in
Percussion Performance that he earned at Central Washington University in 1991.
Soon after graduating from CWU Phil relocated to the Seattle area and has been
teaching and performing professionally in this area ever since. As a performer
Phil has worked with many different artists known both internationally and
locally in a very wide range of styles, such as Stephen Pearcy (voice of the
80's Metal Band Ratt), top local big band The Jazz Police, Popular Las Vegas
Entertainer "Zowie Bowie, and the late great blue legend Isaac Scott (voted into
the Washington Blues Society Hall of Fame 1991). Recently Phil has been working
with some of the most popular dance/show bands in the Northwest, including The
Goods, That 80's Show, Galaxy 54, Vanity, and Gold Digger.
As an instructor
Phil teaches privately at Music & Arts in Kent, Washington!