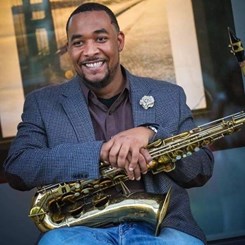 Manzell discovered and fell in love with Jazz at the tender age of 11 and it was that same love that motivated him to study countless hours under the tutelage of some of the greatest music minds throughout his childhood and to continue those studies as an adult. While some would call him a perfectionist he will tell you that he is just passionate about his craft. This passion has helped him to define who he is as a musician, teacher and composer. He has graced stages in Paris France, Italy, London England, Switzerland, Germany, and Austria.

Manzell received his degree from the acclaimed University of North Texas in Jazz studies / Performance, the school that helped create Grammy award winning artists such as Norah Jones, the Eagles, and Snarky Puppy and is home to the world famous One O'Clock Lab Band.
His influences include everyone from Miles Davis, Dexter Gordon, to Grover Washington Jr. and Joe Henderson just to name a few. His compositions respectfully and uniquely pay homage to his mentors and he prides himself on being ever so careful to honor the traditions of the Jazz community while blazing his own trail.
Whether you are starting from the beginning or enhancing what you've already got P. Manzell Bledsoe is able to help you reach your musical goals!