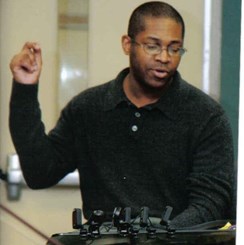 "This will be our reply to violence: to make music more intensely, more beautifully, more devotedly than ever before." -Leonard Bernstein

I was born and raised in East Texas, receiving my Bachelor of Music and Master of Arts in Music Education from Stephen F. Austin State University.  I spent seven years in public schools in the surrounding Houston area before teaching with KIPP Houston Public Schools from 2012 to 2016.  My primary instrument is violin/viola under the training of Dr. Isidor Saslav, but I spend the weekends on bass for community events and local performances.  As a young musician, I received an opportunity to perform with former orchestra teacher Ken Lattimore, who is now a member of country/western group Sons of the Pioneers.  I have also performed with the Marshall Symphony, Orchestra of the Pines, the SFA Chamber Orchestra, and the Mu Xi Chapter Men’s Chorus of Phi Mu Alpha Sinfonia.  My twelve years as a strings teacher has included both private lessons and public school settings.  Many of my students have gone on to be involved in regional orchestras, Houston Youth Symphony, and university orchestras.  From 2007 through 2010, orchestras under my care have earned consistent First Division ratings at UIL competitions, including “Sweepstakes” honors in 2008.  It was a particularly special moment for me because I was the first African-American orchestra director and the youngest to do so.  Other superior and first division honors include those from the Humble Invitational, Pride of Texas, and Soundwaves music festivals.  At KIPP Houston Public Schools, students have been featured performers at the Muscular Dystrophy Association Annual Muscle Walk, Downtown Houston’s House of Blues, the 2014 KIPP Gala, and with Mark Wood in a combined Electrify Your Strings concert including KIPP Sharp Orchestra, KIPP Sharpstown Orchestra and Choir, and YES Prep Orchestra.  I work hard to instill the concept of perseverance and systematic practice, constantly reminded by the words of Marianne Williamson that “our greatest fear is not that we are inadequate, but that we are powerful beyond measure.”  I enjoy coaching students of all ages, ability levels, and learning needs so don't hesitate to call and make an appointment today!
Gear Lists
Show:
Page of
Gear Lists -
Show:
Page of