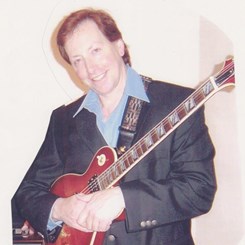 Over 25 years teaching experience on guitar. Skilled in all genres

While taking lessons with Rick over so many years, I have been introduced to countless new skills, techniques, styles of music, and terminology. The skills I have learned helped to shape my love of playing. Every lesson, I come prepared with new things that interest me, and lessons are formatted based on what I find appealing. From finger picking to substitution chords, or composition to transposing new songs, I have learned not only how to play but also how to branch out and even play for other people at different local venues.

Unlike other teachers, Rick has a strong background of performing. He has played any style, at any location, at any given time in his life. He is able to take his experiences and musical lessons learned and pass them on to me as an aspiring musician and intrigued student.

I have always had a desire to learn to play the keyboard. Rick Cragg has made that dream a reality. Rick makes his teaching personal to my needs and has a way to make me feel successful even when I am struggling. He encourages me to go that extra step, proving to myself that "I can do it".

In the short time that I have taken lessons from Rick, I am able to read Chord Charts, have developed an understanding in rhythms and rhythm notations, the relationship between notes and reading standard musical notation. As a teacher, Rick Cragg is a very patient, with a hands on teaching style, giving a good exercise for home practice moving into the next level.

Rick Cragg has an outgoing personality that will instantly make you feel comfortably at ease.I have seen Rick's performances, He is a talented musician that is extremely passionate about music. His energy and love of music shines through in all that he does, giving inspiration and encouragement to his students.

I've learned how to read and identify notes on the guitar as well play numerous power, bar, and open string chords. I've learned basic, intermediate, and several advanced skills on the guitar and can play proficiently with relative ease. I've learned many different playing techniques such as slides, hammer ons and pull offs, and bends. I've also learned how to play dozens of songs and have learned finger picking. Most recently, I have been learning how to arrange music for the guitar including techniques like chord-melody.

I've been through more than a decade of schooling and have encountered dozens of teachers throughout my life. Out of these dozens, I know of only a few who are like Rick. His positivity, enthusiasm for music and teaching, sense of humor, interesting stories, and never ending supply of friendliness and cheer defines who he is as a musician, teacher, and person. The way he tailors lessons to be about what the student wants to learn and his willingness to go along with whatever people are interested in, no matter how strange or unexpected, makes him one of the coolest teachers I've ever known. His abundance of musical talent, knowledge and experience is amazing to witness and experience, and he knows how to keep things interesting. I don't think there's ever been a lesson with Rick where I haven't left feeling better than when I first got there. Basically Rick is one of the coolest guys and best teachers that I've ever known and I would rate him an 11 out of 10.

Throughout my five years with Rick, I’ve learned how to perform a song in public, understood the common forms of chords and become a confident singer. Rick’s instruction goes beyond basic guitar; he has been able to instruct me in transcribing, music theory, and vocals. I’ve performed at multiple guitar recitals and at coffeehouse locations. For me as an individual, playing guitar has become a part of who I am and Rick’s lessons are a vital part of my musical self.

As a teacher, Rick excels in every meaningful way. He makes lessons interesting, exciting and motivating for his students. His knowledge of various forms of music is vast and Rick can cater to almost any student’s musical taste or preference. Because Rick is an active performer, he can help students who are interested in forming bands and he also offers numerous performing opportunities for all his students. I would recommend Rick without hesitation to any aspiring guitarist who wants to learn their instrument in an engaging and logical manner.