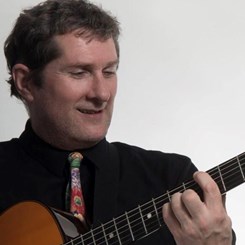 Interested in taking lessons with Robert “Bobby B” Betlejewski

About Robert “Bobby B” Betlejewski

Bobby B’s (Bobby Betlejewski) interest in music goes back to childhood. Early photos document him in his crib, holding guitars and Beatles albums. He teaches guitar- electric and acoustic...from enthusiastic beginners to really enthusiastic advanced guitar players!!! He also teaches: bass guitar, beginner banjo, mandolin and ukulele at the WORLD RENOWNED “MUSIC AND ARTS” stores in Ellicott City (Wednesday’s) and Odenton (Thursday’s), Maryland. As well as a select number of students locally at his home in Ellicott City, Maryland and globally via SKYPE, FACETIME or GMAIL VIDEO. Bobby can also be seen performing in numerous live situations including the award winning ‘Pop meets Jazz-Fusion & Country’ band “Bobby B. and Friends”. Bobby has also taught at The Community College of Baltimore County, The Community College of Howard County, Towson State University Prep and has taught for over a decade at The Friends School of Baltimore where he remains as an “On Call Faculty” member and advisor. Lately, the East Coast based guitarist /multi-instrumentalist /vocalist has been touring North America with the ‘Super-Acoustic-Klezmer’ group “The Atonement Band”. The trio released an EP of 7 songs in January 2010 which has been embraced not just by the Klezmer fans but Bluegrass and Jam-Band circuits as well. Bobby’s playing resume includes numerous live and recording credits on indie and major label CD’s, radio and TV shows as well as commercials and major motion pictures -plus- enough musical artists to fill a jukebox. A brief list includes Country favorites Joe Diffie, Marty Stuart and RB Stone. Blues harmonica legend the late Jim Allison. Jazz/Fusion artists Ethel Ennis and John Jorgenson as well as Rock n’ Roll legends The Box Tops, The Shirelles, The Del Vikings and The Chiffons just to name a few...

Bobby B. is dedicated to sharing the joy of making music!!!

***Bobby is actively pursuing his PASSION as a "MUSICAL SIDEMAN" and entertainer!!! Whether he's playing acoustic guitar, electric guitar or bass guitar... mandolin...or handling vocals for individual gigs, tours or recording projects...Bobby feels "MOST MUSICALLY REWARDED" when he is helping to create and/or perform the "BEST MUSICAL PRODUCT" that stays true to the band or individual artist's vision!***

Read some of the things people are saying about Bobby B :

“A gifted writer, he creates innovative material and reveals highly diversified skill with styles ranging from vocal pop to jazz, fusion, country, and blues, all of which he plays with equal authority. He’s very clean and tasteful, standing out in whatever style he chooses to express himself in.”
Guitar Player Magazine (Mike Varney - review of Bobby B's self titled album)