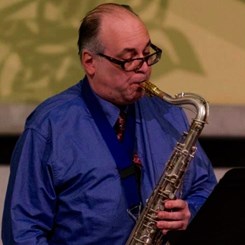 Mr. Komada has been a life long resident of Bucks County, and for most of the last 40 years has been a professional musician in the area. In 1983 he chose University of the Arts (Phila.) for its wide palette of musical styles, and excelled in both the classical and jazz ensembles simultaneously.

An invitation to Belgrade and the International Clarinet Competition in 1987 bolstered his position as one of the finest clarinetists extant. After graduation in 1988, he pursued a busy schedule of performances including the Brevard Music Festival (87-88), the Music Festival of Arkansas (91-92) and touring nationwide with the Theatre of Omaha (pit orchestra, 93-94), culminating with a full-ride Jazz scholarship with the world-celebrated Aspen Music Festival (1995).

“Mr K”, as his students call him, turned his attentions to teaching in 1995 in order to reach a more diverse clientele, as such beginning a long tenure with Philadelphia Archdiocese Catholic schools including Cardinal Dougherty and Archbishop Ryan, where his woodwind sections received high honors in Tournament of Bands competitions.

During all this time Mr.K accepted a position as Professor of Music at Chestnut Hill College in 2008 where he has taught the complete Woodwinds Method Course, and Saxophone Class, eventually becoming the natural choice to lead the Jazz Ensemble. Mr.K added Flute and Oboe to his wide range of musical abilities shortly after 1990.

Whatever musical challenge there may be, Mr. Komada is beyond well prepared to help his students achieve whatever they desire, as several generations of well-trained and high achieving students can attest.