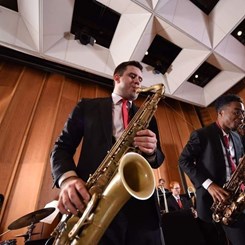 Robert Nordli can be seen fronting his own group (Rob Nordli Jazz Quartet) on tenor saxophone, and as a sideman with Da$htone in the Chicago land area. He can be heard on Da$htone’s most recent album “Scuffed Kicks” (2017). Robert Nordli has spent the past seven years completing a bachelor’s degree in jazz studies at Elmhurst College under the direction of Doug Beach, and a Master’s degree in jazz studies at Northern Illinois University. He was selected for a graduate assistantship, given the responsibilities to instruct a jazz history course at Northern Illinois University. Robert Nordli spent several years studying with Mark Colby, Frank Portolese, Mike Pinto, Frank Caruso, Reggie Thomas and Geof Bradfield. He has also toured internationally in Germany, and Mexico with NIU and Elmhurst in addition to several national destinations. As a student, Robert Nordli has accompanied international acts such as the Manhattan Transfer, Ralph Lalama, Gary Symulyan, Dennis Mackrel, Camille Thurman, and Victor Provost to name a few.
Robert Nordli has spent the past six years teaching private lesson at Music and Arts, Tritone Music School, Palatine Music Center, and his own private studio to students of all levels on instruments such as the saxophones, clarinets, flute, and piano. In addition to teaching, he directs rehearsals and conducts local community big bands. Robert Nordli also has experience as an adjudicator for the Harper College Jazz Festival. He has led a master class at the Lincoln way High School Jazz Festival for all saxophone sections.