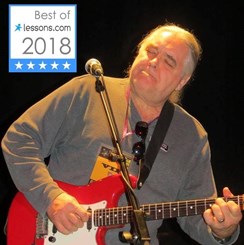 I have been instructing guitar since 1972, teaching over 1000 students. My main objective is to have my students simply enjoy the art of playing guitar, while also gaining musical knowledge. You are welcome to read testimonials at www.RogerWilsonGuitarStudio.com.

Veteran guitarist accomplished in electric and acoustic guitar from age nine in 1963. He originally owned and operated the Roger Wilson Guitar Studio in Buckhead from 1973 to 1985. Traditionally influenced by Blues, Rock, Americana, and Folk. Currently performing as an electric guitar driven trio, and solo acoustic performer. Presenter of guitar workshops nationwide, with personal and online guitar instruction. In addition to teaching and broadcasting, he also spent many years working in the Atlanta radio market, as well as ten years at CNN. He has been performing, touring, recording, and writing fulltime since 1995. He has been a resident of Cobb County and Kennesaw since 1981.

April, 2013 – Present – Serving on the Advisory Board of The Georgia Music Industry Association.

2003 – Present – Blues In The Schools - Currently deliver guitar and blues history clinic's in schools, as well as libraries, community centers, and blues festivals.

1992 – Present: Roger “Hurricane” Wilson – Kennesaw, GA:  Recorded twenty plus CD’s since 1994, and has toured extensively across the U.S. and parts of Europe in clubs and festivals as a solo artist, and with a band. Has opened for such acts as B.B. King, Buddy Guy, Little Milton, Magic Slim, Hubert Sumlin, John Mayall, and many other national touring acts.