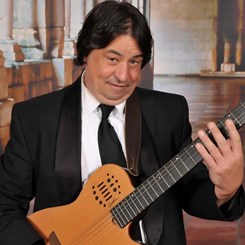 He played in rock and jazz bands all through high school and college including a performace for the legendary drummer, Buddy Rich.
Ron credits his Dad, Boris, an awesome guitarist in his own right, for his early guidance and ability to master all  styles of music.  "Of all the different styles that I play, places that I've been and people I've played with, my favorite and most challenging playing is still with my Dad, my mentor. If it wasn't for him, I would have never picked up an instrument."
MID 80's:
During the mid 80's Ron spent much of his time on the road touring with various classic rocks bands such as THE TURTLES, GARY LEWIS & THE PLAYBOYS, GARY PUCKETT AND THE UNION GAP, THE GRASS ROOTS, THE MONKEE'S, HERMAN'S HERMITS, THE BYRDS, MARK LINDSAY, THE VILLAGE PEOPLE, THE DRIFTERS, THE COASTERS, THE PLATTERS and more!
THE NEXT 2 DECADES:
Ron spent most of his time back in Chicago writing, recording and  playing with a variety of bands while developing a loyal student base. Known as an extraordinary guitar teacher, Ron has a legion of faithful students across the USA.
He is proud to have had the opportunity to entertain the troops all over the Middle East (Iraq, Kuwait, Bahrain, Qatar, & UAE) with the 101st ROCK DIVISION.
"It was an honor to play for our troops. I met some of the greatest men and women of my life".
NOW:
Ron is captivating audiences all over the world with his endearing charm and rare versatility. A true guitar virtuoso playing classical, jazz, flamenco and rock with the utmost technique, speed and style.