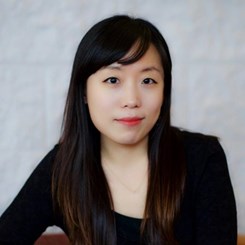 Sangmi Yoon started learning the piano at the age of seven in Korea. By the age of ten, she started winning prizes in competitions including the State Arts Festival Competition and the Seoul Competition in Korea. This was the real starting point of her musical life.

After she immigrated to the United States, she continued her piano studies with Ji Eun Lee and started to expand her musical career. After winning the U.S. Youth Piano Competition of Hymns in Washington D.C., Ms. Yoon began her studies with Dr. Hsiu-Hui Wang at Howard Community College, and finished her BA at Goucher College, also studying with Dr. Wang. During this time, Ms. Yoon won competitions such as the E.R. Davis Collegiate Piano Competition in Maryland, and the third prize and Best Required Piece in the 14th International Young Artists Piano Competition, in Washington D.C. The Washington Competition resulted in an invitation to perform at the State of the Arts Cultural Series and the U.S. State Department. Ms. Yoon also premiered a composition by Li-Ly Chang, Capriccio for piano solo at the Kennedy Center’s Millennium Stage.

At college, Ms. Yoon was the first recipient of the HCC Rose Buck-Lew Family Piano Endowment Scholarship at HCC, and the Fine and Art Performing Arts (FAPA) Scholarship at Goucher. She received her Master of Music degree and Graduate Performance Diploma in Piano Performance from Longy School of Music, where she studied with the Conservatory’s Dean, Wayman Chin, and also performed in the master classes of Peter Serkin. Ms. Yoon has collaborated and performed in numerous chamber groups. She is also active in accompanying for various types of solo instruments and for choirs.

Ms. Yoon started to expand her teaching experiences while she was living in Boston for three years. After a long journey, Ms. Yoon returned- now as a faculty member- to Howard Community College, her ‘home school’ to share her stories with her students and community through her teaching and performances. She also actively maintains her private studio in Howard County, Maryland, where she resides.