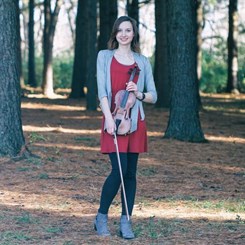 Sarah Aldiab is an experienced teacher and performer of violin/fiddle and viola. She has taught all ages and many styles, including classical, Celtic fiddle, pop/rock, and folk music. Performing professionally since 2015, Sarah has played in many classical ensembles for weddings and events, as well as in Celtic music groups and in an electric rock string ensemble called Electria.

After completing her music degree, Sarah found a love for teaching when she began her teaching studio in Lexington, KY. Helping students reach their goals in music was very rewarding! Sarah also began an ensemble class with her private students, and co-founded a new strings program called String Sounds, where she taught group classes for elementary, middle school, and adult students. Students studying with Sarah have been featured soloists in their school orchestras, and have achieved Honors Orchestra and All-State orchestra positions.

After teaching a thriving studio of students in Kentucky for four years, Sarah relocated to Kent, Washington, where she now teaches! Sarah really enjoys the opportunity to bring the excitement of playing music to her students. She finds it exceptionally important to start beginners with strong technique skills, providing a good foundation for their playing. She then introduces advanced techniques to allow for more musicality and maturity in playing. Sarah aims to keep lessons inspiring and encouraging and holds regular recitals to give students a chance to perform their pieces.

Sarah is a graduate of Eastern Kentucky University, with a Bachelor of Music degree in Music Performance. She is an Orchestra Merit Award recipient and held the principal violist position in the EKU Symphony Orchestra. Sarah was elected president of the EKU American String Teachers' Association chapter in 2013-2014, and traveled to Italy to study music in the summer of 2015. She was also honored to play in many faculty string ensembles during her college years.

Sarah has studied Irish fiddle music under great masters such as Tommy Peoples and Kevin McKee. From a young age, she attended classes at many Irish music festivals in the U.S., and even traveled to Ireland for four weeks to learn more. Her experience with pop/rock styles began in college when she created her own string arrangements out of popular songs on the radio. She then took this love for playing popular music when she began performing with Electria.

Sarah loves the beautiful Pacific Northwest and is happy to be teaching again here in Kent!