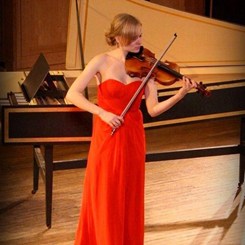 Sarah Wolffe, violin, (Port Jefferson, NY) has recently completed her Bachelor of Music degree from the Purchase College Conservatory of Music. She graduated Summa Cum Laude in violin performance, studying under Calvin Wiersma and Laurie Smukler. Throughout her studies at Purchase, Miss Wolffe had collaborated with conductors Michael Adelson, Ransom Wilson, Guillermo Figueroa, Hugh Murphy, and Karina Canellakis. In March of 2014, Sarah performed the Prokofiev solo violin sonata in a master class with Bayla Keyes. During her final year at the conservatory, she served as co-founder and Concertmaster of the Purchase College String Orchestra, as well as Principal of the Purchase College Symphony Orchestra.
Sarah, in recent years, has been described as having "a thirst for knowledge and a passion for all that is creative." Beginning her studies at the age of 8, Sarah quickly began to discover her deep love of music, and, soon after, took a step forward into the world of performance. In December of 2008, Sarah served as the Concertmaster of the New York All-State Symphony Orchestra under the direction of Anthony Maiello. She made her Carnegie Hall debut in 2009, when she served as the Assistant Concertmaster of the Metropolitan Youth Orchestra of New York, performing the world premiere of Jay Greenberg's "Skyline Dances." Sarah had also served as the Concertmaster of the New York State Summer School of the Arts orchestra under Luis Biava, collaborating with members of the Philadelphia Orchestra and Mark O'Connor, violin.
More recently, Sarah has been an active chamber musician, performing works by Mozart, Brahms, Borodin, Ravel, and Haydn, as well as the Schumann Piano Quintet in E-flat major in December of 2013, and Bartok's Second String Quartet in May of 2014. Sarah plans to continue her studies, aspiring to complete a dual master's degree in performance and music therapy.