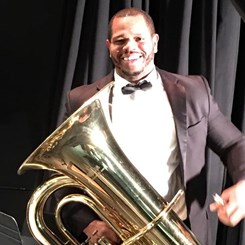 Mr. Lawston started playing tuba in 7th grade in the state of Florida. After moving to Maryland for high school, he continued to develop his musical skill sets, specializing in Tuba.  After high school, Mr Lawston attended Morgan State University. In 2008, he obtained a Bachelors of Arts Degree in Music Performance and Tuba Performance as a graduate of the University.

After graduation, Mr Lawston performed in a multiplicity of orchestral and band ensembles. This included the Baltimore Symphonic Band, and the prestigious John Lamkin Quartet. His experience as a musician encompasses a variety of styles and performance genres. As a classically trained tuba player, he is able to perform with the most sophisticated and complex orchestras and bands in the United states.

Additionally, Mr Lawston has over five years facilitating private lessons for brass instruments, specifically Tuba, Trombone, and Trumpet. He has coached both beginner and more experienced musicians to fine tune their craft and advance their musical pros.