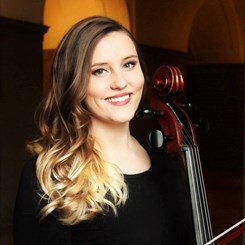 University of Missouri-Columbia, Bachelor of Music, Royal Conservatoire of Scotland, Master of Music

I love opera! It is so satisfying to sit in the pit and play the most beautiful music in the world. I love collaborating with the singers and experiencing how grand, yet intimate, the production can be. My favorite opera is Suor Angelica by Giacomo Puccini.

I have been performing in public since I was 5 years old. I started with the Suzuki method on violin and eventually took up the cello too. I played in recitals every year for my teachers’ studio recitals and once I started college, I began to play more chamber, opera, and symphonic music. During my undergrad at Mizzou, I performed Shostakovich’s first Cello Concerto with the University Philharmonic and I had the privilege of playing the Elgar Cello Concerto with the Royal Scottish National Orchestra when I lived in Scotland. I have performed with major orchestras in the UK including the BBC Scottish Symphony Orchestra and the Royal Scottish National Orchestra. As mentioned above, I LOVE opera. So much so that I spent two summers in Italy performing for countless productions of seven operas. I also sat principle in TUNDI’s production of Tristan und Isolde in Brattleboro, Vermont last summer and it was an experience I will never forget!

I have taught privately for the last seven years at home in Missouri and in Massachusetts to children and adults of all ages. As teaching assistant to Professor Edward Arron at the University of Massachusetts Amherst, I taught private lessons to undergraduate and graduate elective cello students and led sectional rehearsals for the UMass Symphony Orchestra. I also enjoyed coaching undergraduate string quartets as a fellow in the Graduate String Quartet Program at UMass. Additionally, I taught through the Community Music Program at the University of Missouri-Columbia during my undergraduate career and have served on the faculties of the Prindle School in Hadley, Massachusetts and the Eduardo Ocón International Music Festival in southern Spain. While studying in Scotland, I fondly remember traveling to the suburbs of Glasgow to demonstrate string instruments to primary school children as part of the Royal Scottish National Orchestra’s Community Outreach Program. In addition to teaching at Music & Arts, I also teach orchestra to kids in grades 6-8 in the Pattonville School District in St. Louis.

Shannon Merciel is an American cellist with a passion for travel, teaching, and collaboration. Originally from Jefferson City, Missouri, she has spent the past several years away from home, continuing her musical education and gaining experience in the classical music industry.

Shannon has spent her summers attending music festivals including the Meadowmount School of Music, Green Mountain Chamber Music Festival, Montecito Festival, and Festival MusicAlp in Tignes, France. She played in the orchestra for the Mediterranean Opera Studio and Festival in Sicily in 2017 and 2018, performing in multiple productions of Così fan tutte, La bohème, Tosca, Le nozze di Figaro, L’elisir d’amore, Il barbiere di siviglia, and Madama Butterfly. Last summer, she returned home to Missouri as a full-time member of the Missouri Symphony for its annual Hot Summer Nights Music Festival and subsequently sat as principal cellist for TUNDI’s productions of Tristan und Isolde in Brattleboro, Vermont.

As an avid chamber musician, Shannon co-founded Trio Doyenne along with Lithuanian pianist Monika Mašanauskaite and Belgian violinist Michelle Dierx. Together they form an emerging piano trio which has performed across Europe for organizations such as the Edinburgh Fringe Festival in Scotland, Festival Musique et Patrimoine in France, and the Eduardo Ocón Festival in southern Spain. In 2018, the trio won first prize in the Josep Mirabent i Magrans Chamber Music Competition (Sitges, Spain), and were recipients of the Mary D Adams Prize for Chamber Music awarded by the Royal Conservatoire of Scotland. Shannon will join her trio in Scotland to perform recitals in April of 2021.

Shannon received her Bachelor of Music from the University of Missouri-Columbia and Master of Music from the Royal Conservatoire of Scotland. She has been lucky to study with incredible teachers including Darry Dolezal, Alison Wells, and Edward Arron. Shannon plays on a c.1980 cello made by Harry J. Reeve in St. Louis, Missouri.