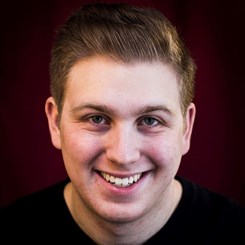 Skyler Klein is an active performer, as well as voice, piano, and school music teacher based in the Northern New Jersey/Southern New York area. Mr. Klein excels at helping students of all ages reach their goals in performance, whether it is learning how to sing out, or to play a piano masterpiece.

Mr. Klein is a graduate of Westminster Choir College in Princeton, New Jersey. While there,He studied voice with internationally renowned Baritone Elem Eley. As part of the Westminster Symphonic Choir, Mr. Klein sang under the baton of such eminent conductors

In addition to teaching privately at Music & Arts, Mr. Klein is the Vocal Music Teacher at Christopher Columbus School No. 15 in Elizabeth, New Jersey.