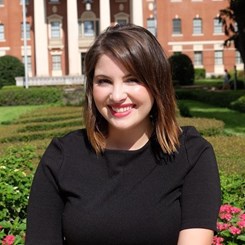 Sophia is a vocalist from a small town in Colorado with a passion for Rhythm & Blues. Sophia grew up participating in every choir she could spare time for, including middle and high school select and honor choirs. She first started performing solos when she was 10 years old, and progressed to singing in local restaurants, sports games, and weddings. Although she was part of a very small school where music education was lacking, she ventured outside of her town to find coaching for her talent.

Sophia began taking lessons from German opera singer Dr. Diane Bolden-Taylor, DMA and Voice Head at the University of Northern Colorado in Greeley, Colorado for 3 years until she graduated from high school. Dr. Bolden-Taylor trained her classically and helped her establish the fundamental skills she would need to continue singing in all other genres.
After high school, Sophia attended Baylor University in Waco, TX for 2 years studying Biology while being heavily involved in the School of Music. She was the Soprano section leader for the Heavenly Voices Gospel Choir during both years and was President of the Baylor University Women's Choir in her second year. What she values most was her time singing southern and Nigerian folk Gospel in the Heavenly Voices Gospel Choir. These two choral experiences only enhanced her abilities as a solo performer.
Since attending Baylor, Sophia has spent time traveling and meeting mentors from all over the world. She has recently relocated the Montgomery County area and is planning to finish her BS in Biology and continue with a master's in Public Health. While her first pursuit is toward her degree in the sciences, she is appreciative of living in an area with so many musicians and being a part of Music & Arts; she hopes to start performing solo again soon and explore her full potential as an artist!