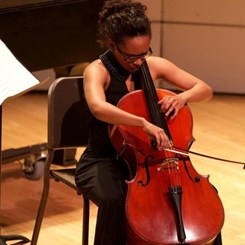 Stephanie started studying cello at the age of fifteen. In 2009, she started her college studies at Virginia Commonwealth University. While at VCU, in addition to being the principal cellist of the VCU Symphony Orchestra, she was selected to perform in solo cello master classes with world renowned cellists Bonnie Hampton, Hannah Holman, Zuill Bailey, Timothy Eddy, and Clive Greensmith. She has also participated in various chamber music masterclasses with the Maia Quartet, Roger Tapping of the Takacs Quartet, the Brooklyn Rider String Quartet, the Aviv Quartet, the Emerson Quartet, and members of the Tokyo String Quartet.

Stephanie received a Bachelors of Science in Psychology and a Bachelors of Music in Performance from Virginia Commonwealth University in May of 2014. She continues to study with Dana McComb and resides in Richmond, Virginia, where she teaches privately and performs as a freelance cellist.