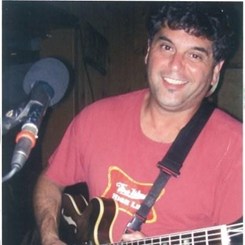 Practicing is like the story of Hare and the Tortoise .

The turtle won the race. Be the turtle

Thomas Campo is an accomplished guitar player, singer and music teacher, who has been performing at various venues on Long Island and the Tri-State area since 1980. He is also a performer and manager of The Cravin Band (a local quartet which performs a wide variety of music on Long Island). Tom is currently teaching guitar privately and at the Music & Arts Center at the Stony Brook, Mount Sinai and Lindenhurst, N.Y locations.

Tom began his musical journey back in 1979 while learning under the tutelage of Mr. Peter Rogine, Department Head of the Guitar Faculty at Five Towns College. He continued his musical course of study in 2001 with renowned guitarist, Mr. Bob Gallo whose credits included national session artist for the Bill Cosby Show and A Different World. In 1988 Tom began his professional musical career as a bandleader and solo artist. His teaching experience dates back to 1994 while working at the Long Island Drum & Guitar Center in Medford, N.Y. A native of Long Island, Tom graduated from Five Towns College with an Associates Degree in Applied Science.

He currently resides in Riverhead, N.Y