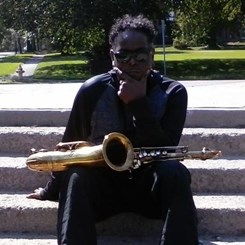 Tim Wicks is a fluent and vibrant tenor saxophonist who is renowened for his improvisory elegance, extravagant warmth, big sound, and soulful blues-invested grooves with melodic intrigue.

Hearing the soulful and funky music during 70’s & 80’s inspired Tim to fuse the music styles of funk, jazz, and R&B as his musical pallet.

Tim Wicks comes from a music family and began playing saxophone at the age of eight. Tim’s development as a musician began in the city school’s music program. His first music classes were in elementary school. Under the instruction of Calvin Cage, Tim began to learn how to play the sax and read music. In addition to his school education, Tim was performing with Dangerous Intersection, Syndrome Band & Show and the Tim Wicks Band at nightclubs, concerts, and parties playing various styles of music from funk, R&B, jazz, rock, and classical.

After graduating from high school, Tim Wicks attended Virginia Commonwealth University. At VCU, Tim Wicks had the opportunity to play with a host of great musicians attending VCU and living in the city of Richmond, Virginia.

As a music educator, he has had the opportunity to teach and inspire young minds to excel in music with the Yonkers Public Schools, Rochester City School District and with various charter schools in New York City.