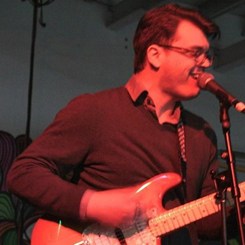 I played the violin in school from 3rd grade to my senior year of High School, I studied guitar privately for 6 years

If you've seen me in the store you know that I enjoy anything that fender puts there name on. We carry all my favorite Strats and Telecasters as well as the many Fender Tube Amps they offer. I personally own the Fender Hot Rod Deluxe which I bought from Music and Arts a couple years ago and it's been a working horse since I bought it. Because we carry a various amount of guitar strings I'm able to experiment with many different brands such as Dean Markley, D'addario and Ernie Ball. If you ever have a question about your guitar or a guitar you're looking to purchase I'll be more than happy to help you.

I've studied contemporary jazz privately and studied classical guitar at Suffolk Community College. Music is something that I'm very passionate about and being able to help people get the tools they need to continue playing is something that I take pride in. I always look forward to seeing a returning customer and get feedback on purchases they've made in the past.

My first introduction to music was when I played the violin in Jericho Elementary School. I enjoyed playing in the orchestra so much that I continued to play all the way until my Senior year at Mt. Sinai High School. Throughout my middle/high school career I've played in the Orchestra, Chamber Orchestra, Pit Band and Jazz Band. While in school I was asked to play Violin, Guitar and Mandolin for many different groups.

Outside of school I started a band when I was 13 called The Bellegards. I'm still in that same band and we have been recording our most ambitious project this summer. My band has offered me a chance to travel and perform in some of my favorite music venues and also work with some of my favorite musicians and engineers. We have big plans for the future and look forward to releasing our latest material. We write original material for young directors to put in their thesis films and one of the songs won Best Original Song in a Short Independant Film when the movie debuted at a Seattle Film Festival. From that we've had a growing fan base in our home town area and the West Coast.

At the Stony Brook Music and Arts we are eager to help people get started with playing and help the professional players build on their collection.