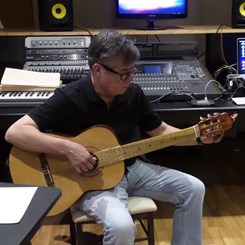 from Mexico City, self-taught himself to play the guitar at the age

of 9; he later studied Jazz guitar harmony with Fernando Robles

City). He completed his music education in composition and

conducting at The Royal Conservatory Of Music of Toronto, and

at The Juilliard School.

During the over 25 years of his professional career, Walterio has

worked in several fields of the music industry. He has composed

original music for commercials, TV shows and movies. For

several years, he was music director for Sesame Workshop, the

production of the children’s show Sesame Street). He worked as

music and creative director for The Walt Disney Studios for 12

songs from animated films. He has worked as a consultant for the

Latin Grammy Academy, both as member and chairman of the

He plays professionally with the band Back Door Drifters, and also