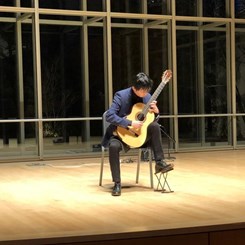 over 10 years of performance experience

"his technique was amazing"
​- ClevelandClassical.com
​
Yeram Yoon is an award-winning guitarist known for his diverse repertoire, fluent technique, and sensitive musicianship. He started playing the guitar at the age of 10 with eclectic influences ranging from blues, rock, R&B, jazz, and classical music.

Throughout his studies, he has garnered impressive accolades with over 16 competition prizes, multiple scholarships, and various performance invitations, making a name for himself as an up-and-coming guitarist of his generation. He was a two-time recipient of the Ablan Memorial Scholarship from the Cleveland Institute of Music which recognizes the “most promising guitarist” as well as the “most talented guitarist”. He has also made appearances at renowned venues such as the Cleveland Classical Guitar Society Showcase Concert and the Marlow Guitar International Series.
​
Yeram received his bachelor’s degree at the Cleveland Institute of Music under the tutelage of renowned guitarist and Grammy award-winner Jason Vieaux. In the past, he has also studied extensively with Brazilian guitarist Joao Paulo Figuieroa, L.A. session guitarist Tom Lawrence, American classical guitarist Colin Davin, jazz guitarist Don Better, and jazz guitarist Pete Billmann. He is currently pursuing his graduate degree on a full scholarship with Cuban guitar virtuoso Rene Izquierdo at the University of Wisconsin-Milwaukee, Peck School of the Arts.

In addition to performing and teaching, Yeram is also an avid arranger for the guitar and enjoys adapting various kinds of works for the instrument ranging from popular tunes to piano transcriptions.
For more details or inquires visit at https://www.yeramyoon.com/
Video Albums
Show:
Page of
Video Albums -
Show:
Page of