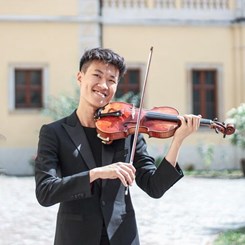 As an avid musician, he has made appearances in venues like Carnegie Hall, Eastman Theater, Hong Kong Cultural Center, Music Academy of the West, the Banff Center, and most frequently in recent years, Jordan Hall in Boston where he has appeared with NEC’s Contemporary Ensemble’s concert series, NEC Philharmonic and NEC Chamber Orchestra. Yip Wai was also part of the premiere of Gammified, a quartet by Tod Machover commissioned by the Kronos Quartet in the spring of 2019. Other than performing in the traditional concert halls, Yip Wai, together with Boston-based non-profit organization Fermata, reaches out to living rooms or workplaces to give interactive chamber music concerts paired with food and beverages to promote chamber music outside of the boundaries and stigmas in traditional concert settings.

Yip Wai has won awards from the Brookline Symphony Concerto Competition, MTNA Young Artists Competition, and he was the first prize winner of Japan-Hong Kong International Music Competition. He made his concerto debut at the age of 15 with Hong Kong Medical Association Orchestra under the baton of Dr. Joseph Kam in Hong Kong City Hall Concert Hall. Yip Wai has also appeared as “Eastman School of Music Rising Star” in 2015 on Rochester’s radio WXXI.

During winter and summer breaks, Yip Wai is invited to different music festivals or programs to work with renowned musicians and other young musicians from all over the world, including programs like New York String Orchestra Seminar, Music Academy of the West, Banff Center Masterclasses, Bowdoin International Festival, Lyricafest, Moritzburg Festival Academy, and Colorado College Music Festivals - where he was granted numerous opportunities to perform as a soloist, chamber musician and concertmaster. In the summer of 2018, Yip Wai toured with his string quartet of the time in Italy from Courmayeur to Moneglia with Zephyr Music Festival.

Yip Wai graduated from the New England Conservatory with a Master’s degree, under the tutelage of Ayano Ninomiya. Previously, he earned his Bachelor’s degree and Performer’s certificate from the Eastman School of Music where he studied with Robin Scott and Charles Castleman. Currently, Yip Wai performs on a 1723 J.B. Vuillaume which is generously made possible by Orfeo Strings, Hong Kong.