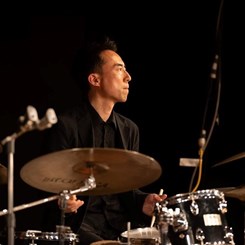 Drummer/composer Yutaka Uchida is a Tokyo native who has established his career in and around New York City. He is a magna cum laude graduate of Berklee College of Music where he majored in jazz composition and was awarded Berklee Achievement Scholarship Award and Louie Bellson Award for his outstanding performance. As a versatile and creative drummer, Yutaka has worked extensively with numerous artists from diverse genres worldwide. He has toured internationally with such renowned artists as Phishbacher, Elisabeth Lohninger, Nobuki Takamen and Tatsu Kisaragi, and has made appearances at prestigious music festivals such as Montreal Jazz Festival, Hartford Jazz Festival, DC Jazz Festival, and NYC CultureFest to name a few. Current projects he is involved with include some of the most creative jazz/fusion groups in New York such as The Archi-tet whose music has been featured on a TV program in Japan; award-winning composer/guitarist Noshir Mody’s ethnic-fusion sextet; as well as his own electro-acoustic instrumental group MUSOH. He is also a core member of Mascot’s Distance, where he contributes as a drummer, backup singer and an arranger to its sophisticated jazz-inflected pop that has garnered critical acclaims. As a composer he was awarded grants twice for his cutting-edge original works and successfully held concerts for New York's most discerning audiences. Yutaka's name is credited on over a dozen full length albums as a sideman, as well as on his first album as the leader “Living Together,” which features 10 original tunes of his, displaying his talent not only as a drummer but also as a composer, a music director and a producer. All About Jazz gave it a rave review saying, “… it is easily one of the top outings of the year [2007].”

Noshir Mody / Stories from the Years of Living Passionately (2014)