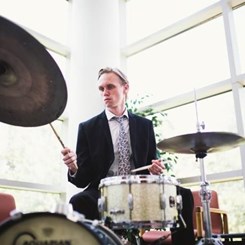 Born into a family of music-lovers, Zac has been surrounded by music all his life. After playing a little piano in elementary school, he found an interest in the drums just before middle school band. He even started his first garage band shortly after getting his first drum kit at age 13. Quickly becoming percussion section leader in high school, as well as receiving the John Philip Sousa Band Award and the Louis Armstrong Jazz Award, Zac has had a gift for the drums from an early age.
Starting with a Music Education major in classical percussion at UNC-Greensboro, Zac put the education aspect on hold to better his skills as a musician and auditioned for the Jazz Studies degree program, as well as beginning to regularly perform in the local music scene. Now a graduate of UNC-Greensboro’s Miles Davis Jazz Studies Program, Zac has made himself a staple in the Greensboro music community.
After refining his craft performing and arranging for the classical and jazz ensembles, he has now made a reputation gigging and recording regularly with multiple bands and artists across a wide variety of genres (including rock, metal, funk, hip-hop, Latin, jazz, country, etc) playing all over the state. Although put on hold, education still holds a major role in Zac’s career, as he has also begun to hone his skills as an educator, providing private lessons, teaching and coaching middle and high school drum lines, percussion sections and jazz bands, as well as giving clinics at several schools in Guilford and Alamance counties. Dedicated to all things drumming and building his collection of instruments and knowledge, Zac has provided service to his fellow drummers by being one of the only drum technicians in the area, performing minor to major repairs, refurbishing, restoration, tuning, and customization.
Zac is a passionate, energetic, and all-around great guy, and our store is fortunate to have him!