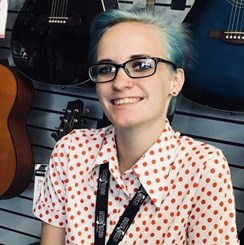 This past Friday, we had our second of many Open Mic Nights. We featured a Korean Rock band called, The Monday Feeling, and they really knocked our socks off!

The Monday Feeling came from South Korea and is currently touring in California. Music and Arts had the honor of being their first show in the United States! They played cover songs, like "Teenage Wasteland" and a few songs from the Foo Fighters, as well as their original music, one titled "Thei Thei Thei"! Their rock sound and enthusiasm of music drew in a crowd of people and blew everyone away! Their performance was truly amazing, and Music and Arts hopes to see them again very soon!

If you, or someone you know, is interested in out Open Mic Nights, stop by our store every 2nd Friday of the month! Open Mic Nights start at 6:00pm and go on until 8:00pm! So, come join us to have a jam session, play a solo, or bring a band to perform your favorite song! All ages are welcome!