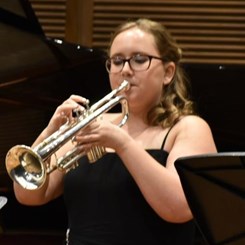 Get to know Abigail Jansen

Abigail Jansen, from Pickerington, Ohio, received her Bachelor of Arts degree with a Music Studies Concentration and Psychology Minor from the University of Dayton in 2019. Currently, she is working towards a PreK-12 Teaching License in Music Education at Otterbein University. She has played trumpet since 2008 and has taken lessons with Michael Sewell, Dr. Dan Grantham, and Eric Knorr. She has also studied guitar with Jim McCutcheon, piano with Dr. Randall Wolfe, and voice with Emily Evans. In addition to Bb trumpet, Abigail has learned and performed on the C trumpet and flugelhorn in both solo and ensemble settings. Abigail has been involved with many ensembles, including the Pride of Dayton Marching Band, Symphonic Wind Ensemble, Dayton Jazz Ensemble, University Orchestra, Trumpet Ensemble, Flyer Pep Band, and the Reynoldsburg Community Band. She was also a member of the Delta Sigma chapter of Sigma Alpha Iota, an international women’s music fraternity, and the UD chapter of Psi Chi, an international psychology honor society. Abigail has held numerous leadership positions, including: trumpet section leader and EMT in the Pride of Dayton; ushering coordinator and treasurer in Sigma Alpha Iota; and tour manager in Symphonic Wind Ensemble. During her college career, she served as principle trumpet in both the University of Dayton Orchestra and Trumpet Ensemble. She has also been involved in several small projects, including lending her voice to the podcast Standards of Behavior, voicing the roles of Penny and Faith. Outside of Music and Arts, Abigail works as an infant teacher for Kimberlee's Kiddie College in Pickerington, Ohio.
Abigail Jansen teaches at:
Hilliard
4672 Cemetery Road
Hilliard, OH 43026
(614) 876-9004
Get Directions More Details
Skip link