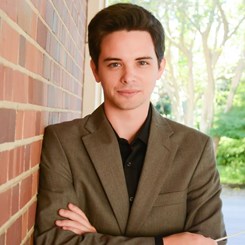 Get to know Adam DePriest

Adam DePriest is a conductor and violinist from Aiken, SC with a BM and two MM degrees from the University of South Carolina where he studied violin under William Terwilliger and Neil Casey and studied conducting under Donald Portnoy. DePriest has received additional conducting training from Grant Cooper, Peter Jaffe, Jorge Mester, and Neil Thompson.

Receiving his start at an early age, DePriest made his solo debut on the violin at the age of 12 with the Augusta Symphony and has continued to be a sought-after performer who is well-versed with many experiences ranging from ensemble leadership to solo appearances and recording studio sessions. Additionally, DePriest began studying double bass at the age of 16 and made his solo double bass debut with the Augusta Symphony at 18 years old. DePriest regularly performs with his brothers as the DePriest Trio and actively performs with several regional professional orchestras including SC Philharmonic Orchestra, Augusta Symphony, and Aiken Symphony.

As an advocate for string education, DePriest is a regular guest clinician for orchestra festivals in SC. He teaches private lessons and directs after school programs in Columbia and Aiken, SC as well as in Augusta, GA. DePriest is currently an adjunct faculty member for the Department of Visual and Performing Arts at USC Aiken where he oversees string-related studies, teaching applied lessons and string methods, directs ensembles, and teaches music appreciation. Making a local impact, DePriest helped to found, facilitate, and launch strings programs at Aiken Center for the Arts, Augusta Preparatory Day School, and Episcopal Day School (Augusta). In July 2019, DePriest helped to reinstate the South Carolina Suzuki Institute. This season, DePriest has helped to coordinate educational outreach initiatives with Aiken Symphony Orchestra.

As a highly skilled and engaging conductor, DePriest carries an incredible background to the podium to invoke the best out of any ensemble that he directs. He consistently elevates these groups to achieve high levels of musicianship. Continuing to make a hometown impact, DePriest is the director of the Aiken Youth Orchestras, and is the founder and director of Augusta Virtuosi and Aiken Civic Orchestra.