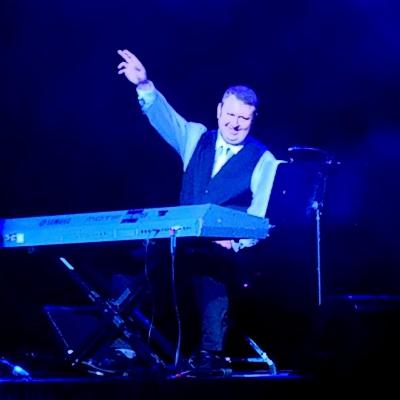 Adam Harman
Music Teacher, Master
Location: Frederick, MD
Speaks: English
Instructs: Piano
Education: Music Theory/Ear Training/Arranging classes at HCC. Studied Classical Piano from a private teacher. Many years of professional teaching at the school of Hard Knox.
Performance Experience: I have been performing on stage since the age of 2. I've been a professional musician since 2001.
Teaching Experience: For 10 years I have taught students note reading and music theory (preferably from the Piano Adventures by Fabers). I've taught students how to play by ear and how to arrange. As a bonus, I also teach how to play the Clavinet, the Wurlitzer, the Rhodes and the B-3 Organ.
Teaching Philosophy: I spent many years hating piano lessons when I was a kid. I thought they were boring and agonizing. However, my love for music and the desire to want to play the piano kept me from giving up. Now after 30 years of playing I realize that it takes hard work and discipline to learn the piano, but it does not have to be painful. That's why I feel that my teaching style will make piano lessons FUN!!!! My ultimate goal is to get my students to their goal which is... to be able to "PLAY THE PIANO."
Book Now

Get to know Adam Harman

I started learning the piano at the age of 8 years old and for the last 20 years I have made a career at playing the piano for groups,

bands and as a studio session player. I cover a wide range of genres that include Classical, Contemporary Christian, Gospel, Country,

Southern Rock, Motown, Oldies, Jazz and Pop. I've traveled all over the United States, Canada and Mexico and have played

and in theaters along the parkway in Pigeon Forge, TN.  I've also done cruise ships, worked some amazing venues like Freedom Hall Civic Center in Louisville KY and

performed in front of crowds of 30,000 to 40,000 people. I've had the opportunity to work with and learn from some of the best musicians

in the business and now, I want to share these secrets with YOU!

Adam Harman teaches at:
Hagerstown MD
18023 Garland Groh Blvd
Hagerstown, MD 21740
(301) 733-1441
Get Directions More Details
North Frederick MD
7820 Wormans Mill Rd Suite K
Frederick, MD 21701
(301) 620-2015
Get Directions More Details
Skip link
With over 150 locations nationwide, Music & Arts is the nation’s leading provider of private music lessons, band and orchestra instrument sales, rentals and repairs. Our remarkable story of growth has everything to do with the countless unshakable relationships we’ve formed with students, parents, music educators and musicians of every stripe in the local communities we serve across the country. Since opening our first store back in 1952, we’ve been owned and operated by the same family, and there’s nothing we do as a company without our values in mind. For whatever you’re doing in music, we’re here to help. We hope you visit our Frederick location soon! Our friendly staff can’t wait to meet you.