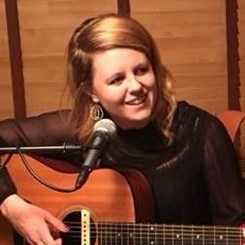 Get to know Anna Beck

Anna Rose first picked up the guitar one summer while in the course of completing a biomedical engineering degree at Duke. She began performing at local music venues shortly after graduating in 2010 and soon garnered a reputation for her hushy middle-soprano intensity, finger-picked guitar lines, and evocative lyrics.

Beck recently completed a Master’s in Music in Jazz Composition at North Carolina Central University where voice was her primary instrument. There she studied under jazz vocalist Lenora Helm Hammonds and artist-in-residence Branford Marsalis. She performed with the acclaimed North Carolina Central University Vocal Jazz Ensemble from 2015 to 2018, and appeared on their sophomore album, Take Note (released 2017.)

Beck now performs regularly as part of the folk/bluegrass/swing group The Gingersnaps and as an artist-in-residence at Duke University Hospital.