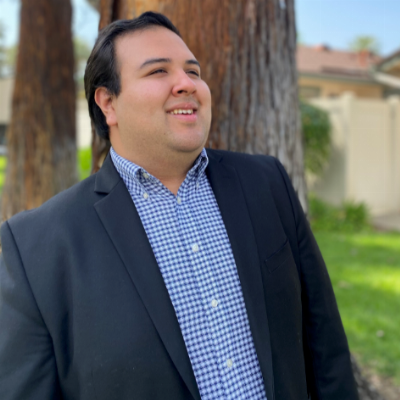 Carlos
Music Teacher, Expert
Location: Glendora, CA
Speaks: English, Spanish
Instructs: French Horn, Trombone, Trumpet
Education: Citrus College Azusa Pacific University
Performance Experience: Carlos has been working professionally in the Los Angeles area since 2015 having played with some of LA's finest Latin,Jazz and top 40 groups. As well as some local orchestras. As well as playing locally he has toured extensivley with various artist.
Teaching Experience: Carlos has over 6 years of teaching expirience with students of all levels.
Teaching Philosophy: My approach to teaching comes from two schools William Adam approach and the Jimmy Stamp approach. "The imagination is the driving force behind music making. Hearing the desired result vividly in your imagination will activate whatever physical activity it takes to make that sound." Fire it up! - William Adam
Book Now

Get to know Carlos

Carlos Jiménez, Trumpet is a Los Angeles based Musician that was born and raised in LA. Carlos grew up in a family that loves music. Carlos is thus far the first in the family to pursue the dream of playing music. He started playing trumpet in the 4th grade and has not stopped since. When he has that horn on his face there is no doubt in his love  passion and dedication for the trumpet.

While growing up he self taught himself and learned a few things at school he did not receive private instruction until his junior year of high school because it was simply not in the family's budget. He attended Alexander Hamilton Senior High School Academy of Music, The  Colburn Conservatory, Thelonious Monk Institute of Jazz, Beyond the Bell LAUSD All City Jazz  Band, He Marched three Tournament Of Roses Parades with the Allcity Honor Marching  Band, The Los Angeles Jazz Society Bill Green Mentorship program, and a few others. Carlos loves to play all styles. He is extremely  passionate about playing music and teaching. He is proficient in many styles (including jazz,  pop, and latin) and teaches all ages. He will never hesitate to go to great lengths to help anyone and everyone he can in any way. Carlos believes that we are all capable of being great at everything and anything we set our minds to, “nothing is impossible it all comes down to how bad you want it and never taking your eyes off the goal.”

He has played and continues to play with some of LA's finest Latin, Jazz and top 40 groups.  As well as with the Santa Monica College Symphony Orchestra. Carlos has had the privilege of  Touring with groups such as La Sonora Santanera playing Trumpet with them for 6  years, Three tours with Melissa Manchester, Missus Jones and most recently with Mariachi Garibaldi de Jaime Cuellar,  he has also had the pleasure of playing with The John Stephens  Big Bluzz Band and The Jimmy Mcconnell Jazz Orchestra and had the great opportunity of sitting in with The Gerald Wilson Jazz Orchestra before Mr. Wilson passed on. Carlos has also done many studio recordings in the Los Angeles area in all genres.  He also has had the privilege to back  up artist such as Barbara Morrison, Patti Austin, Trumpet Legend Arturo Sandoval, Jimmy Borges, The  Temptations, Bob Mintzer, Terrl Stafford, Ndugu Chancellor,Peter Erskin, Lee Secard, Sal Cracchiolo, Jeff Hamilton Chico Pinheiro as well as many others.

Along the way he's had the privilege of studying with some of the country's top called trumpet  players such as Sal Cracchiolo, Gilbert Castellanos, Charley Davis, Robert Slack, Bobby Shew, Jim Wilt, Boyd Hood and Malcolm Mcnab.

Over the years Carlos Has developed himself to be an all around trumpet player being able to  play all styles of music. “Growing up in Los Angeles I’ve been surrounded by music my whole life. Since I was very young I was always intrigued by the sound of music, I never thought I  would suddenly have this raging fire inside of me for music.” Carlos continues to play with many  groups and travel extensively on tours across the country.

Carlos teaches at:
Glendora CA
848 S Grand Ave
Glendora, CA 91740
(626) 963-0263
Get Directions More Details
Skip link
With over 150 locations nationwide, Music & Arts is the nation’s leading provider of private music lessons, band and orchestra instrument sales, rentals and repairs. Our remarkable story of growth has everything to do with the countless unshakable relationships we’ve formed with students, parents, music educators and musicians of every stripe in the local communities we serve across the country. Since opening our first store back in 1952, we’ve been owned and operated by the same family, and there’s nothing we do as a company without our values in mind. For whatever you’re doing in music, we’re here to help. We hope you visit our Glendora location soon! Our friendly staff can’t wait to meet you.