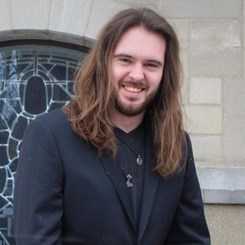 Christopher Cozzi
Music Teacher, Master
Location: Glendora, CA
Speaks: English
Instructs: Bass Guitar, Guitar, Music Theory
Education: Bachelor of Music in Composition - Columbia College Chicago 2016 Master of Fine Arts in Music Composition for the Screen - Columbia College Chicago 2018
Performance Experience: Since 2012, Christopher has been recording and performing as a guitarist. Starting with his recorded album in 2012, he's performed with various progressive rock, extreme metal, and folk metal groups including the folk metal band Eikthyrnir, with which he toured in 2015 and recorded two albums with. Christopher also supplies session work and records the guitars, bass, and keyboard parts for all of his scores in addition to his independent symphonic black metal project Resurrectionist.
Teaching Experience: Christopher has been a private guitar, bass, and music theory instructor since 2014
Teaching Philosophy: Christopher believes in teaching students the rudiments and essentials of music through the music that excites his students the most. He tailors his curriculum to the individual student's interests and tastes so they learn music in a way that is organic, engaging, and always exciting. He would much rather simplify a complicated song to teach scales, chords, and note reading than teach music that his students do not like or do not care about.
Book Now

Get to know Christopher Cozzi

Christopher J. Cozzi lives in Los Angeles where he works as a composer for media.  Cozzi received a bachelor's degree in music composition from Columbia College in 2016.  He received his MFA in music composition for the screen at Columbia College in 2018.  He sees his music as a vehicle to tell stories whether they're communicated in film, video games, on the stage, or in the concert hall.

As a guitarist, Christopher has been performing, touring and recording since 2012, having toured and recorded two albums with Folk Metal group Eikthyrnir, as well as session work, and providing the guitars on all of his scores. Christopher's background in heavy music combined with his deep knowledge of music theory and composition make him an adaptable and resourceful instructor, being able to adapt to any student's needs and musical interests.