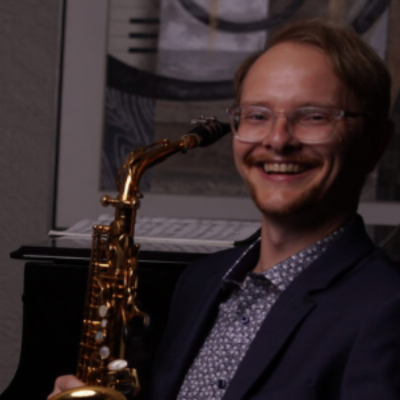 Get to know Dylan Ward

Dylan Ward is a saxophonist who specializes in classical, contemporary, and improvised music. He has appeared as a soloist with the North Carolina Symphony, Georgia Philharmonic, Raleigh Symphony, and Jackson Heights Orchestra, and as a chamber musician in venues including Lincoln Center, Kauffman Center for the Performing Arts, Constellation Chicago, and Mesa Arts Center. He regularly presents recitals at the North American Saxophone Alliance Biennial Conference and United States Navy Band International Saxophone Symposium.

Ward is a recipient of the William R. Kenan, Jr. Fellowship at Lincoln Center Education, an organization dedicated to developing skills of imagination, creativity, and innovation through experiential learning and the arts. He has presented masterclasses and clinics in public schools and universities throughout Arizona, Michigan, Missouri, Wisconsin, North Carolina, and the United Kingdom. Ward has been honored as an Artist Fellow at the inaugural Eighth Blackbird Creative Lab, 2018 Bang on a Can Summer Music Festival at MASS MoCA, and 2019-2020 Charlotte Street Foundation Studio Residency.

Ward his a candidate for the Doctor of Musical Arts from the University of Missouri­–Kansas City, where he served as a graduate teaching assistant to Zach Shemon. Ward has received degrees from Michigan State University, where he served as a graduate assistant to Joseph Lulloff, and the University of North Carolina School of the Arts, where he studied with Taimur Sullivan and was a recipient of the William R. Kenan, Jr. Excellence Award, the school’s most prestigious scholarship.

Dylan Ward teaches at:
Concord Mills NC
8653 Concord Mills Blvd
Concord, NC 28027
(704) 979-5260
Get Directions More Details
Skip link
With over 150 locations nationwide, Music & Arts is the nation’s leading provider of private music lessons, band and orchestra instrument sales, rentals and repairs. Our remarkable story of growth has everything to do with the countless unshakable relationships we’ve formed with students, parents, music educators and musicians of every stripe in the local communities we serve across the country. Since opening our first store back in 1952, we’ve been owned and operated by the same family, and there’s nothing we do as a company without our values in mind. For whatever you’re doing in music, we’re here to help. We hope you visit our Concord location soon! Our friendly staff can’t wait to meet you.