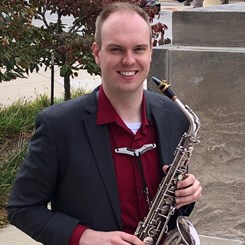 Evan Gidley
Music Teacher, Master
Location: Westerville, OH
Speaks: English
Instructs: Clarinet, Flute, Saxophone
Education: MM in Saxophone Performance, University of Cincinnati College-Conservatory of Music
Teaching Experience: More than 10 years of experience teaching students in grades 5-12 as well as undergraduate college students
Teaching Philosophy: My role as instructor is to teach my students how to teach themselves. I encourage curiosity and problem-solving, and cater my to individual student needs.
Learn from the best

Get to know Evan Gidley

Evan Gidley boasts an impressive resume as a bandleader, composer, and woodwind artist fluent in both classical and jazz performance. He has performed at a number of the United States’ most prestigious venues, including Carnegie Hall and Jazz at the Lincoln Center. As a soloist, Evan has appeared with the Marion Philharmonic Orchestra, Purdue University Fort Wayne Community Orchestra, and the University of Cincinnati Chamber Players, performing Darius Milhaud's' La creation du monde.

As a freelance jazz, classical, and pit orchestra musician, Evan can be heard performing throughout the Midwest as both a sideman and as leader of the Evan Gidley Quartet, a group he formed in 2015. In addition to his active performance career, Evan serves as a private woodwind instructor for students grades 5-12. His students have earned Gold ratings at Indiana’s District and State Solo and Ensemble contests and have been selected to perform in regional honor bands.