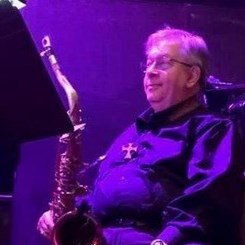 Francis Hill
Music Teacher, Master
Location: Columbia, SC
Speaks: English
Instructs: Clarinet, Saxophone
Education: Master of Music (Performance & Pedagogy - Saxophone - Northern Illinois University; Bachelor of Science in Education (Music); Performance Certification (Clarinet)
Performance Experience: Wind ensemble, Military band, Community bands, Church ensembles, Touring performances.
Teaching Experience: Elementary / Secondary Instruction in Instrumental Music; Private Instrumental instruction.
Teaching Philosophy: Music is vastly more than a collection or set of notes performed in time. It is the ultimate expression of the human condition. As such, the acquisition of the skills needed to perform music need to be approached with a sense of purpose and diligence. The skills that a student must master should be repeated until they are confident in their performance. It is the teacher's responsibility to persistently provide positive encouragement to their students on their musical journey.
Learn from the best

Get to know Francis Hill

Frank is a seasoned professional musician who has performed in over 30 states and 8 foreign countries in his professional history. A native of Chicago, Frank organized his first band at the age of 15. He attended Northern Illinois University in DeKalb, Illinois where he was a vocal education major. He enlisted in the US Marine Corps where he began to hone his skills as a professional musician; playing in Viet Nam, Japan and Okinawa plus 9 states in the Southeast US. After serving honorably for 4 years, Frank returned to Northern Illinois University and received a Bachelor of Education degree in K-12 Instrumental music. He was one of the founding members of the Northern Illinois Jazz Ensemble and performed on their inaugural record in addition to touring throughout the Midwest.

After receiving his Master of Fine Arts degree in Performance and Pedagogy on Saxophone, Frank taught grades 5 – 12 instrumental music for 2 years and conducted pit orchestras for South Pacific and A Funny Thing Happened on My Way to the Forum.

After a year spent in the sales world, Frank enlisted in the US Army as an Army musician. During his two year duty in New Jersey he was awarded the Samuel Barber award for composition for 2 consecutive years. While stationed in Germany, Frank performed with the 9‘th German Airborne Band and The Stuttgart Polizei Band in 3 different countries. He also played for the 35’th anniversary of D Day in France and Belgium. He returned to New Jersey and was subsequently sent In Korea in 1988 as a member of the 8’th US Army Band supporting the 24’th Olympics. Frank performed over 25 combo gigs in support of the 24’th Olympiad and marched in the Pre-Olympic Parade – a distance of over 14 miles. After returning to New Jersey He retired as a Sergeant First Class in 1992. Since then Frank has played in 2 community bands and 3 different churches in New Jersey, Florida and South Carolina. In South Carolina Frank teamed up with a local pianist to perform at the WIX television Sounds of the Season for 3 years and has performed at local senior residences In the Midlands, the Pee Dee region and the Lowlands.

Frank currently is a member of the Lexington Baptist Church Orchestra, performing on Alto &Tenor Sax in addition to Soprano and Bass Clarinet. He has also performed with a local pianist for Christmas Eve pre-service music.