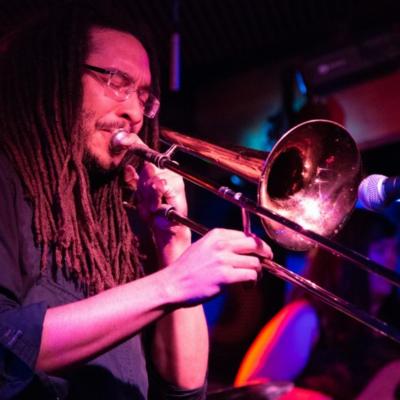 Get to know Freddy Gonzalez

Professional composer, trombonist, and music educator with over 15 years of performing and recording experience. 12+ years teaching private lessons to students of all ages and experience levels. Effective leader who immerses himself in his passion for music.
Has opened for Ruben Blades, Eddie Palmieri, Talib Kweli, De La Soul, and B.B. King while having performed alongside Alejandro Sanz, Juan Luis Guerra, Bootsy Collins, Arturo O’Farrill, and Melissa Aldana. Featured on Wu Tang Clan’s 20th Anniversary Album “A Better Tomorrow,” (2014). Performed at the “Tudo e Jazz” Festival in Ouro Preto, Brazil (2013). Notable venues include The Kennedy Center (D.C.), Alice Tully Hall at Lincoln Center, Yankee Stadium and The Blue Note (NYC).National television appearances include The Today Show with Jesse McCartney, CNN with The Freddy Fuego X-Tet, and Noturno in Brazil with The Underground Horns. Radio appearances include NPR in 2020, WNYC’s Gig Alert in 2014, and WBGO in 2012.
Freddy Gonzalez teaches at:
Bothell WA
10120 Main St
Bothell, WA 98011
(425) 486-5000
Get Directions More Details
Skip link
With over 150 locations nationwide, Music & Arts is the nation’s leading provider of private music lessons, band and orchestra instrument sales, rentals and repairs. Our remarkable story of growth has everything to do with the countless unshakable relationships we’ve formed with students, parents, music educators and musicians of every stripe in the local communities we serve across the country. Since opening our first store back in 1952, we’ve been owned and operated by the same family, and there’s nothing we do as a company without our values in mind. For whatever you’re doing in music, we’re here to help. We hope you visit our Bothell location soon! Our friendly staff can’t wait to meet you.