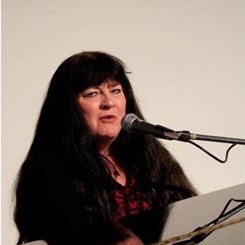 Get to know Geri Sparre

Geri Smith grew up playing piano and guitar. She earned her degree in Music Education from West Chester University, but instead of going into teaching full time, she began her career as a performer and recording artist. She later attended the Juilliard School in NYC as a graduate student. Geri has released two full length albums “This Chain” and “Two Sides to a Story”. She appears locally as singer and guitarist with dobroist Jim Daughton in their acoustic rock duo. Smith’s versatility allows her to cover a wide variety of material, including Rock, Blues, Jazz, Singer-songwriter and Pop. Geri has been teaching privately for over 40 years, and also taught classroom Music in both public and private schools.
Geri Sparre teaches at:
Salisbury MD
1205 MOUNT HERMON RD
Salisbury, MD 21804
(410) 219-1092
Get Directions More Details
Skip link