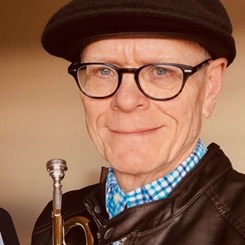 Get to know Gregory Foertter

Originally from Buffalo, NY, Greg Foertter began his career as a trumpet player and music educator in his grade school band at age nine. His studies with David Kuehn (Buffalo Philharmonic) in high school prepared him for a three year tour with the 26th Army Band in NYC where he was a featured soloist and where he continued his trumpet studies with William Vacchiano (NY Philharmonic) at the Manhattan School of Music. His studies continued at the Frost School of Music at the University of Miami with Gilbert Johnson (Philadelphia Orchestra), where he graduated with honors and received a Bachelor of Music degree in Trumpet Performance. His graduate degree in Music Education was earned at Florida International University. As an educator, Mr. Foertter has shared his love of music with children from preschool through grade 9, teaching general music, band, chorus, and drama. He has composed more than 100 songs for kids and performed them with guitar accompaniment.

Mr. Foertter’s trumpet career includes a 10-month road trip with the famous dance band, Guy Lombardo and the Royal Canadians, as well as a military band career spanning 24 years and ending in Miami with the 13th Army Band, Florida National Guard. He currently resides in Oak Ridge, TN, where he enjoys composing works for small ensembles, and where he maintains an active teaching studio.