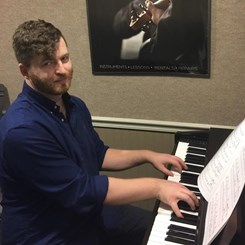 Get to know Ingvar Jacobson

Music has been a huge part of Ingvar’s life. At the age of 7, he began studying piano and violin privately. At 16, he performed piano in the American Fine Arts Festival at Carnegie Hall in New York City. He Attended UMBC for Music and Music Technology. When he’s not teaching, he is heavily involved in the Baltimore Music scene recording and producing Baltimore’s greats of all genres.

His teaching philosophy is very theory and fundamental based. Starting out with how to sit properly at the piano, how to hold the violin correctly and personally building a curriculum around the student so they can thrive in a musical world.