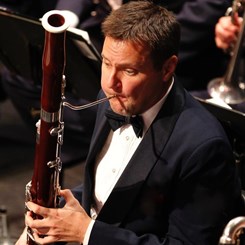 Get to know Jesse Schartz

Jesse Schartz is a highly regarded studio teacher and freelance musician in the Columbus area. In addition to being a Master Instructor of Bassoon and Saxophone with Music & Arts, he is also a Lecturer at The Ohio State University School of Music where he teaches the Bassoon Techniques course for music education majors. Jesse also performs regularly as a member of the New Albany Symphony Orchestra and the Westerville Symphony. Prior to settling in Columbus, Jesse served nearly two decades at home and abroad in the United States Air Force Bands as principal bassoon and woodwind quintet music director. He also frequently performed on saxophone with various Air Force jazz and ceremonial ensembles. Jesse has toured extensively in the United States, and has performed in over 20 countries throughout Europe and the Middle East. He has also performed frequently as an associate musician on bassoon and contrabassoon with many orchestral ensembles, most recently with the Virginia Symphony Orchestra, Virginia Musical Theatre, Virginia Arts Festival, and the Columbus (Ohio) Symphony. Jesse has worked with young musicians throughout his career as a private studio instructor and clinician. He received his Bachelor of Music degree from the University of Arkansas, his Master of Arts in Education degree from the University of Phoenix, and his Master of Music degree from The Ohio State University.