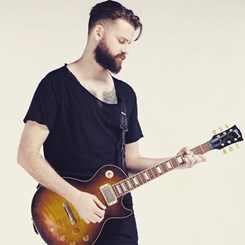 Get to know John Barrett

My name is John Barrett, I have been a musician for over 10 years and I am beyond excited to be a part of the team here at the Lawrence Park Music & Arts! I am primarily a guitarist, but I also have experience with other string instruments, in addition to some brass instruments. I have been a gigging musician for about 6 years, working with original projects and cover bands, in a full member compacity and as a session player.

My primary gig is as the lead guitarist for a group called Waverunner, we play very dance oriented rock/new-wave pop. I also play with an ambient post-rock group based out of Baltimore called Body Thief, and work frequently in a cover group called the Victoria Watts Band. I also work as a session musician in the studio for various recording artists.

I started playing guitar when I was about 10 years old, first taking lessons at Music & Arts! This company has been a part of my life for many years, and I am thrilled to be working as retail manager!