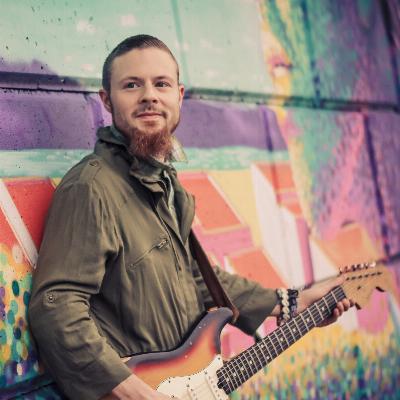 Get to know John Reddan

Born in the Rolling Hills of Warwick, New York, John Reddan was highly influenced by the blues and classic rock music throughout his upbringing as a child. John started playing the guitar at the age of nine, consistently trying to hone his skills. Over the years, he has had many great opportunities to work and play with some of the best musicians that music has to offer. His first guitar teacher early on was guitarist, Jim Kunkel, one of music’s true hidden treasures. A transition later came when meeting Ronnie Earl after a show. Earl encouraged John to take lessons with Chris Vitarello, one of blues finest guitar players.
As a young blossoming musician, the records of the 50’s, 60’s and 70’s influenced John, having heard just about every classic song there was growing up. This included bands such as The Allman Brothers, B.B. King, and Jimi Hendrix. His parents would fill the house with this influential music regularly.
John later enjoyed music classes in high school. Since the school did not offer guitar in band, he took up playing drums and percussion. This was a skill at the time that he would underrate, finding out years later how much it would help his sense of time and rhythm. During this period, John would spend his summers studying guitar at the National Guitar Workshop in New Milford, Connecticut. There, he learned from the influential Matt Smith.
When he finally reached college, John took classes with Jazz pianist, Chris Parker. He thought he might be interested in moving to New Orleans, hoping to major in music at The University of New Orleans. John took his first trek across America on a Greyhound bus to possibly study with Jazz pianist, Ellis Marsalis. Marsalis is considered one of the premier pianists in modern jazz and a stellar music teacher.
Upon coming back to New York, he walked into a bar and met international blues musician, Bill Perry, who had passed by his way many times before. Perry, long running guitarist with Richie Havens, encouraged John to come on stage and play. After playing together one time, Perry asked John if he would be interested in taking a trip to the Midwest to play rhythm guitar with the Bill Perry Blues Band. After that first trip, Perry offered John the gig fulltime. Soon after, John had become a mainstay having played with Perry for five years. Some notable performances with Bill would include The Jimiway Blues Festival in Poland, New Morning Club in Paris, The New York State Blues Festival, and opening up for Bo Diddley at Stewart International Airport. They would play across the world bringing Bill Perry’s high-energy psychedelic blues to the people. John also played guitar on three of Bill’s records that were produced by blues legend Popa Chubby. Between trips, John would give private guitar lessons both at home and also in a music school setting.
After Bill Perry’s passing in late 2007 John has been busy working on stretching his skills as a musician and as a person. John teamed up with his drummer brother, Chris, forming the Reddan Brothers Band in the winter of 2008. They got together to produce and record twelve original songs written by John. Their album opened up many opportunities to play at such Festivals as The Warwick Valley Winery’s Annual Bob Dylan Fest year after year, The Virginia Blues Festival, and Binghamton’s Blues on the Bridge. The Reddan Brothers were honored to open for Levon Helm himself at both Bodles Opera House and at Levon Helm’s Midnight Ramble.
John has also shared the stage with guitarist Jimmy Vivino of The Conan O’Brien Show, James Cotton guitarist Slam Allen, Hudson Valley native Little Sammy Davis of The Levon Helm Band, and Nighthawk’s founder and guitarist extraordinaire Jimmy Thackery.
Since 2012, John has been performing solo acoustic gigs throughout the New York tri-state area.  As of 2015, he is also now a Member of the New York State Blues Hall of Fame. He is one of the founders of the ten-year running Annual Bill Perry Day, drawing thousands of people. He also regularly plays the New York State Craft Beer Winning Roscoe Brewery and continues his local residency at The Wherehouse in Newburgh, NY.  In the summer of 2019, John had the privilege of attending the Roots Rock Revival seminar In Big Indian, NY. In March of 2020, John had the honor of being contacted by Melia Clapton to represent the Turn Up For Recovery Movement in New York City which benefits The Crossroads Center In Antigua.
Music and Arts in Bergen County, NJ – Taught Over 20 students/week ranging ages 5-75 teaching ukulele, guitar and bass guitar. Covering a wide variety of material from standards to modern pop material. Improvisation, site reading, ear training, scale exercises.
Through all of these opportunities, adventures, and experiences, John has become a truly gifted talent at playing guitar, ukulele, mandolin, lap steel and singing.  He continues to study piano and voice all the while perfecting his guitar skills. He enjoys teaching music to students of all ages that are looking to broaden their horizons in the music field.