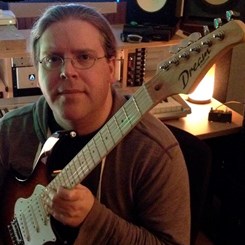 Jonathan Merkel
Music Teacher, Master
Location: Bel Air, MD
Speaks: English
Instructs: Bass Guitar, Guitar
Education: BA Commercial Music from Musicians Institute 1999
Performance Experience: I played guitar in several jazz and rock bands mostly around Los Angeles when I lived there. Since 2010 I have solely focused on performing, writing, recording and producing music for tv, film and commercial placements. My strongest styles are jazz, pop, rock and Latin music.
Teaching Experience: I have been teaching private students since 1997 at various schools, primarily guitar and music production. I also guest lecture yearly on how to place music in tv shows, films, etc. at Temple University since 2015.
Teaching Philosophy: I tailor all of my lessons to the students needs and interests. I have a large and constantly growing collection of personal lessons, sheet music and transcriptions to help all of my students. When I use method books they are mostly the Hal Leonard series.
Learn from the best

Get to know Jonathan Merkel

Jonathan is a multi instrumentalist, songwriter, producer and composer versed in many styles of music. He studied guitar from a young age, learning other instruments and skills along the way. He earned a BA in contemporary music from Musicians Institute and also took classes at UCLA Extension and at Berklee School of Music. He now co owns Beat Chamber and Beat Chamber Records where he produces artists and music for TV, film, commercial and media placements.

Jonathan has written and co written hundreds of songs and instrumental tracks that have been featured and placed on television shows, films, commercials, albums, etc. Jonathan is also a guest lecturer on composing, producing and the music business, he has spoken at Temple University yearly since 2015.

Some of my song placements include