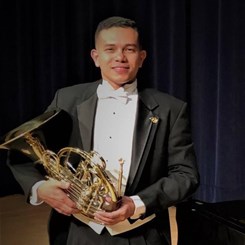 Wilker Augusto, born in Brazil, launched his music career by participating in marching bands in his state of Paraíba. Recognizing his passion for music, he went on to attend the Federal University of Paraíba where he completed his Bachelor of Music in French Horn Performance. also received the prestigious Laurel of Academic Excellence Award.

Wilker has attended both national and international music festivals for both French Horn and Conducting, where he was fortunate to study with distinguished instructors such as Sandoval Moreno, Stanley F. Michalski, John Grant, Albert Nguyen, Carl Collin and John Robert Marr. Additionally, Wilker has studied orchestral conducting with Luiz Carlos Durier, Lanfranco Marcelletti, Rafael Palace Luz, Emilio Caesar, Marcos Arakaki and Isaac Karabtchevsky, Maurice Perez, Cristopher Zimmerman and Catherin Larsen-Maguire. Since 2001, Wilker has served as music director for several marching bands, many of which have won awards like “Best Band” with he himself winning “Best Conductor”. In 2012,  Wilker was the recipient of the “Young Orchestral Conductor” award at the International Music Festival Eleazar de Carvalho in Brazil.

In 2013, Wilker travelled to the United States to participate in the Madeline Island Chamber Music Camp and to volunteer with the Drum Corps International World Class Champions, The Cadets. Wilker returned to the United States in 2016 to complete an Artist Certificate in French Horn Performance at Azusa Pacific University with the renowned teacher James Thatcher. During his time here in the states, he worked as the Assistant Director for Glendora High School Tartan Band and Pageantry, directed the World Music Symphony Orchestra from the Azusa Conservatory of Music, was a Tour Assistant Director for The Cadets Drum and Bugle corps, Brass Instructor to Impulse Drum and Bugle Corps, and with many organizations as an applied French Horn teacher and Brass instructor. Wilker had the honor of finishing his Master’s Degree in Instrumental Conducting under the tutelage of Dr. John Burdett at Azusa Pacific University in 2020.