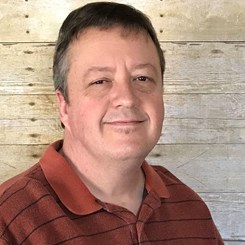 Joseph Bernert Jr
Music Teacher, Master
Location: Peachtree City, GA
Speaks: English
Instructs: Bass Guitar, Guitar
Education: Master's Degree in Theory and Composition from Illinois State University
Performance Experience: Gigged with several bands over the years.
Teaching Experience: Over 35 years of teaching experience.
Teaching Philosophy: My philosophy as a music educator is to empower the student with the tools necessary to succeed not only now, but also throughout the rest of his/her life. I provide this in a student-centric and safe environment and by providing an ecclectic variety of genres to foster long-term enjoyment of the instrument. My ultimate goal is to help them find their own unique voice and playing style for a lifetime of enjoyment.
Book Now

Get to know Joseph Bernert Jr

Mr Bernert began his guitar career at the age of 12 and within 5 years started teaching guitar lessons during his high-school years. Having first learned playing by ear, it was his years in college that helped him bridge the gap between those who play by ear and those that play from sheet music. Along the way he studied piano through applied music courses and further private lessons earning a minor in piano performance at the Bachelor's level of study.

He is well-versed in many styles of guitar playing: rock, pop, funk, classical, 80's hair-metal, 90's grunge, and has taught students from all age levels (10 to 65), and from all skills of playing ability (beginner to advanced) and firmly believes that anyone can achieve great playing abilities with just a little dedication, perseverance, and passion for the instrument.

He hails from the St. Louis/Central IL area where he gigged with several cover bands to hone his performance skills. While he has a wide arsenal of playing styles, he has always been fond of rockabilly/Americana music ( i.e. Brian Setzer, Carl Perkins, Scotty Moore) and secretly holds a love for Irish folk music. When he's not teaching, he can often be found playing Irish pennywhistles and bagpipe chanters.

Mr Bernert holds a Master's Degree in Theory and Composition from Illinois State University with a special emphasis in music technology and a Certificate in Arts Technology.