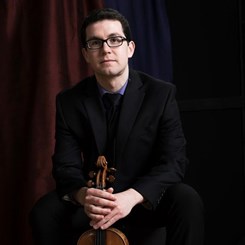 Kevin Sloan
Music Teacher, Master
Location: Horsham, PA
Speaks: English, German
Instructs: Viola, Violin
Education: Doctor of Musical Arts Candidate: University of Maryland (2016-Present) Master of Music: University of Massachusetts (2014-2016) Bachelor of Music: Temple University (2009-2014) Registered Suzuki Teacher: Every Child Can and Unit 1
Performance Experience: 2019-Present: Performed as a member of the Allentown Symphony and the New Jersey Capital Philharmonic 2016/2017: Performed at the Kennedy Center in Washington, DC 2015 Concerto Competition Winner, UMass 2014 Soloist at Collegium Musicum in Pommersfelden, Germany
Teaching Experience: Graduate Teaching Assistant at University of Massachusetts and University of Maryland: 2014-2019 Quartet in Residence at the High School Music Academy, hosted by UMD: 2017 Private Violin/Viola Teacher: 2007-Present
Teaching Philosophy: Registered Suzuki Violin Teacher: “Musical ability is not an inborn talent but an ability which can be developed. Any child who is properly trained can develop musical ability, just as all children develop the ability to speak their mother tongue. The potential of every child is unlimited.”
Book Now

Get to know Kevin Sloan

Throughout his graduate studies, he has held teaching assistantships at both UMass and UMD which have given him opportunities to teach and mentor undergraduate students who are music majors, minors, and elective students. This role consisted of providing private lessons and chamber music coachings, and leading sectionals for both the university orchestra and the elective orchestra. In 2017, Kevin was a member of the string quartet in residence at the High School Music Academy in College Park, MD, serving as both a teacher and a chamber music coach.

Kevin has had multiple opportunities to perform as a soloist in front of an orchestra, both as a competition winner at the University of Massachusetts, and at the Collegium Musicum Summer Academy in Germany, where he was lauded for his "virtuosic musicality in the purest form". As an orchestral musician and member of a string quartet, he has performed in venues including, among others, Carnegie Hall, Lincoln Center, the Kimmel Center, and the Kennedy Center for the Performing Arts. Kevin is a member of the Allentown Symphony Orchestra and the Capital Philharmonic of New Jersey.